The long dark 5 o’clock tea of the soul

Posted by neuronaut on August 31, 2018
The long dark 5 o'clock tea of the soul / Comments Off on Evoked Melodies in Auditory Illusion 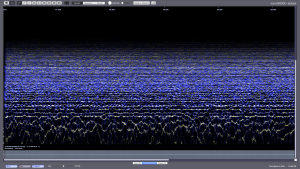 auditory illusion that shows how our brain associates memorized phrases with auditory stimuli. Below is a sound generated by randomly stimulating a neural net that was pretrained on approximately 1000 recordings of brass sounds (both single notes and entire musical phrases). The resulting “drone” is totally uniform and has no temporal development at all (in the sense that there would be individual notes present in that mixture). If you first listen to the audio file it just sounds chaotic and maybe a bit disharmonic, nothing to see here, move along. But wait! Try running the file in the background for several minutes in a loop and you will notice that it appears as if there are suddenly notes, even entire melodies emerging from the mix. If you listen long enough this sound will trigger memories of music that you have listened to in the past, and it will appear as if you can actually make out melodies (even though they are at the brink of just being noticeable in the noise). They can be subtle like a car horn in the distance, church bells, or an ambulance, or (like in my case) an entire phrase played by a jazz trumpet. Try it out, it’s quite fun!

First record of gravitational waves, and it’s a bassdrum

Posted by neuronaut on February 11, 2016
The long dark 5 o'clock tea of the soul / Comments Off on First record of gravitational waves, and it’s a bassdrum

The guys from the LIGO experiment have published their results from apparently observing the merger of two black holes by means of two laser beams creating interference, and if you reverse playback it’s actually a bass drum. Looks like the creator of our universe loves Drum’n Bass music 🙂

Since I’ve been involved in audio demixing for quite some time now (and on occasion have been called ‘crazy’ for even attempting it) and created some tools that clearly prove it can be done (the first one being a product called Påndøra for MacOS in 1998), I do meet the occasional hardliner at trade shows that starts the inevitable discussion about unbaking a cake. It always goes down something like this: “You can’t separate instruments from a mix. This is like trying to unbake a cake. Once all the ingredients are mixed and form the final product that process can’t be reversed, right?” – Wrong! Our auditory perception doesn’t work like that, but if you really must use that example, how about a good cook being able to guess the ingredients from tasting the product? See, it can be done. Noone said it would be a lossless, fully reversible process, but it doesn’t have to be. Our brain is pretty good at filling in the gaps, so any software attempting this must indeed also add to the process.

And for all of you who still remain unconvinced, scientists have recently uncooked egg white. Not exactly a cake, granted, but it’s a first step. Read the article here: http://www.sci-news.com/othersciences/chemistry/science-uncook-egg-whites-02439.html

Posted by neuronaut on March 14, 2015
The long dark 5 o'clock tea of the soul / Comments Off on A Random Thought

I was busy putting the Christmas decoration in storage today when a thought crossed my mind: what if we really didn’t know the first thing about what is going on in the universe? I mean, not just technically, but on a global scale. What if this whole thing is just way over our heads? Wouldn’t this be like the poor spider who lives in the box I was carrying trying to understand the meaning of Christmas? I must admit that thought was very frustrating indeed. But then again, since we’d likely never know, we could as well just carry on. And so I did…